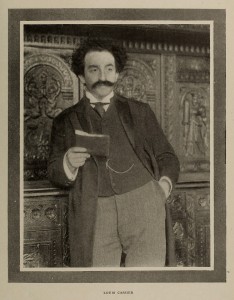 Among the victims of the appalling railway disaster on the London & South-Western Railway, on July 1, was Louis Cassier, the founder of this magazine. Speeding from Plymouth to London, the fast night express, which carried mails and passengers from the American Line steamship “New York,” left the rails near Salisbury. Twenty-three of the passengers were killed and many others injured, and the wreck generally was complete.

Mr. Cassier was on one of his frequent trips between London and New York, and, though usually accompanied by Mrs. Cassier on these journeys, was alone this time. He was born at Boston in 1862, and immediately after leaving school began work in that city, in the advertising department of one of the daily newspapers. This he continued until, late in the eighties, he went to New York, and there engaged in miscellaneous advertising work, principally in connection with the American edition of the “Illustrated London News.”

Of restless disposition, with a vast amount of nervous energy seeking new outlets constantly, he soon felt the need of expansion in directions other than those which he had previously followed. Though not an engineer, engineering appealed to him as a field for publishing exploitation, — exploitation of a new kind with hitherto untried methods, — and the result, after a comparatively brief period of planning, was the first number of the magazine bearing his name, — a magazine of illustrated engineering, intended to deal with steam, electricity, power. This was in November, 1891.

Disaster was freely predicted for the venture, but with the buoyancy of spirit and courage of conviction which characterized him, the work of developing the new publication was pushed unremittingly. In the fall of 1894 a London edition of the magazine was started, and thus on both sides of the Atlantic the publication began to grow and spread to the gratifying proportions which it now has.

Not content with this measure of success, however, Mr. Cassier, late in 1903, purchased “The Electrical Age,” a periodical of many years standing, neglected and indifferently managed until then, but of promising possibilities. The Cassier Magazine Company had meanwhile been formed, with “The Electrical Age Company” as a subsidiary organization, and with Mr. Cassier as president of both, and under this new ownership, “The Electrical Age,” reinvigorated, started out on a new career in 1904, with all signs pointing to as successful a future as that of Cassier’s Magazine. An English edition also of “The Electrical Age,” with offices in London, was projected when death overtook him.

Mr. Cassier was a cosmopolite, — at home on both sides of the Atlantic, — with a host of friends and acquaintances. His personality was striking. To meet him was to remember him.

Original, resourceful, enterprising,he combined in himself most of those qualities which stamp themselves upon men’s memories.