Eugene Grasset was born in Lausanne in 1844 and died in France in 1917. He can be called the father of Art Nouveau because of his work and efforts to educate the burgeoning artists of his day, some of which became architects. He was uniquely qualified to teach students about decorative arts as he himself designed a variety of works including furniture, posters, illustrations, book cover art, lace, wall papers/coverings, fabrics, rugs, pottery, stained glass windows, jewelry, calendars, typefaces and stamps.

The book Eugene Grasset: A Passion for Design is now available through:
Amazon.com
Barnes and Noble

A simple chronology of this life has been translated from the original text by Charles Saunier appearing in Les Arts Français (1919) an is included in the book.

1844-1871.
Attracted in his childhood to the works of Gustave Doré, he wishes to become a painter. His family wants him to become an architect. For four years he studies the theory of architecture and practices it with the same care that he would later apply to all that he did. For a short time, he practices his art in Lausanne but cannot resist his growing urge to explore the unknown. He departs for Egypt where he accepts various assignments to make a living.

1872-1878.
After his return to Europe, he settles in Paris and finds work with a fabric designer.
During this time, he studies to perfect his knowledge of illustration and design. Some illustrated works and a common admiration for Japanese art creates an alliance between Grasset and the photoengraver Gillot.

1879-1881
Quickly captivated by Grasset’s encyclopedic knowledge and originality, Charles Gillot hires him to design and manage the execution of a suite of furnishings from large pieces to andirons. During this same period, Rodolphe Salis calls on Grasset to help decorate his cabaret, the Chat Noir.

1881-1883
Very interested in some illustrations by Grasset, notably those of Petit Nab (1877-78), Charles Gillot asks him to illustrate each page for Histoire des Quatre Fils Aymon, which he illustrates using a chromagraphic procedure of his own invention, a unique style. This work, in which Grasset reveals treasures of archaeological science and of originality, began the 7th of June 1881 and ended the 7th of November 1883.

Although this volume was not immediately well received by traditionalists, Histoires des Quatre Fils Aymon is now, with good reason, one of the marvels of French literature.

In parallel, he creates mosaics for the church of Sain-Etienne de Briare (1893-1897) in view of the instillation of windows for the Orleans cathedral, the life of Jeanne D’Arc (Joan of Arc) (1893) for which he is not retained by vote of the judges despite the unanimous admiration of the critics and artists. Other window designs compensate for this injustice such as St. Hubert, for Lyon (1894), various designs for Aix-en-Provence (1895), Saint-Lô, St. Madeleine for Troyes (1896), la Musique, le Printemps, l’Automne, for Châlon-sur-Marne.

1897-1900
The founder of Peignot, the type foundry, asks him to design a new type face which bears the name of Le Grasset. It is a very legible type face that renders well in black, framing beautifully the clichés (printing plates) which use becomes popular (1897). In 1898, he creates the frontispiece for the Nouveau Larousse illustré. Other works include Méditation, Danger, Inquiétitude. In 1899, Vever ask for jewerly designs. He also decorates the Salon du costume for the Exposition Universelle in 1900.

1900-1917
Grasset, who taught lessons on decorative composition over many years at Vavin, produced wonderful results, and he consecrated a great deal of his time to academic or informative works such as Plante et ses applications ornementales, Brodures, Ferronnerie moderne, and he also resumed his work on Méthode de composition ornementale (1905). In 1917, he introduces, at the École Estienne, his Cours d’histoire et du dessin de la lettre, with the essential ideas summarized in a brochure published beforehand. This is also the period when frontispieces and bindings were created for the Maison Larousse including: covers for the Des grandes editions in-4° illustrées, La Terre (1901), Histoire de France (1908), France Illustrée (1910), La Mer (1912), Histoire contemporaine (1913) and for the cover of the Larousse classique illustré.

He also designed the lettering for the sections of Larousse pour tous as well as 12 charming compositions Les Mois for the Larousse mensuel (1913) and, finally for Larousse, the image of La Semeuse (the Sower) that accompanies the slogan Je sème à tout vent (I sow to all winds) that marks the house of Larousse.

Naturalized as a French citizen for many years, he died in Sceaux on the 23 of October 1917. 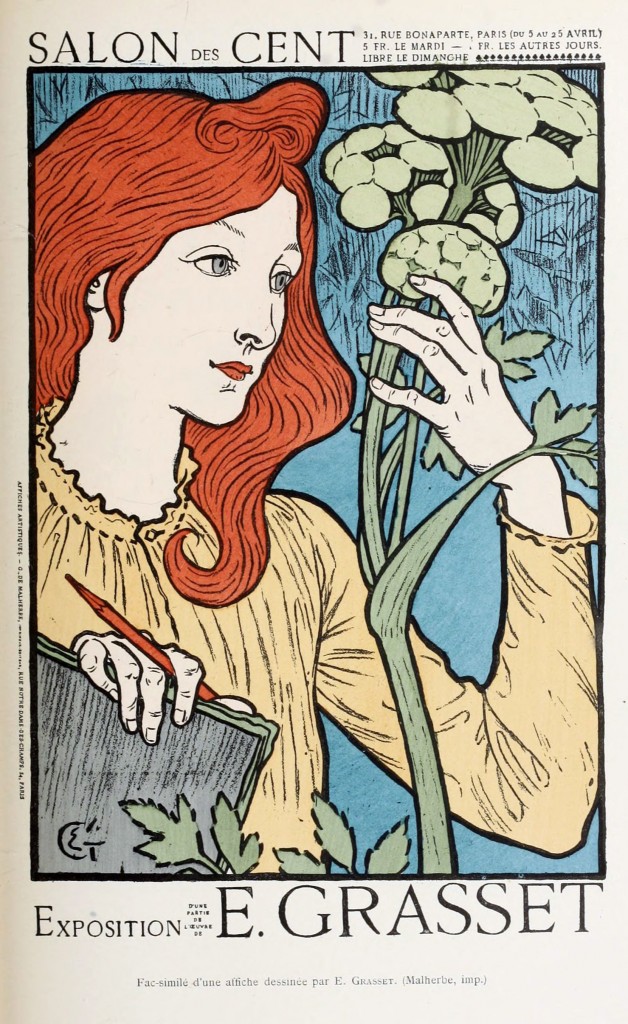